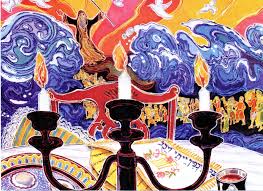 “It is the passover of the Lord…

This day shall be a day of remembrance for you. You shall celebrate it as a festival to the Lord; throughout your generations you shall observe it as a perpetual ordinance.”

Each year at the Passover Haggadah (the worship service celebrating the Passover in the Jewish tradition), a child asks a series of questions beginning with this one: “Why is this night different from all other nights?”

And each year, the faithful respond with these words*:

“We were slaves to Pharaoh in Egypt, and God brought us out with a strong hand and an outstretched arm. And if God had not brought our ancestors out of Egypt, we and our children and our children’s children would still be subjugated to Pharaoh in Egypt. Even if we were all old and wise and learned in Torah, we would still be commanded to tell the story of the Exodus from Egypt. And the more we talk about the Exodus from Egypt, the more praiseworthy we are.”

Each time Passover is celebrated, the ancient story of God’s deliverance is brought from the shelves of the far distant past into the present moment. The Exodus story is affirmed as more than historical memory. It is told and retold as the story of us.

This is where Christians have something profoundly important to learn from our Jewish brothers and sisters.

“Whatever we are to say of his identity as a historical character,” the biblical scholar Walter Brueggemann writes, “Pharaoh is clearly a metaphor. He embodies and represents raw, absolute, worldly power. He is, like Pilate after him, a stand-in for the whole of the empire.”

No matter how powerless we may be tempted to feel in the face of the worldly powers that oppress and complicate world affairs today, we are anything but powerless. We are those who belong to a God who has won the fight with Pharaoh and revealed him for the sham that he is. Every single time.

We have already been liberated from Pharaoh’s grip!

The challenge, of course, is to say “Yes!” to faith in God’s liberation now, and to keep saying “Yes!”,  when the forces of Pharaoh continuously tempt us to say, “Yes, but….” or “That can’t be true.”

*Quotation from a Passover liturgy of The Jewish Federations of North America for non-Hebrew speakers.  http://jewishfederation.org/images/uploads/holiday_images/39497.pdf